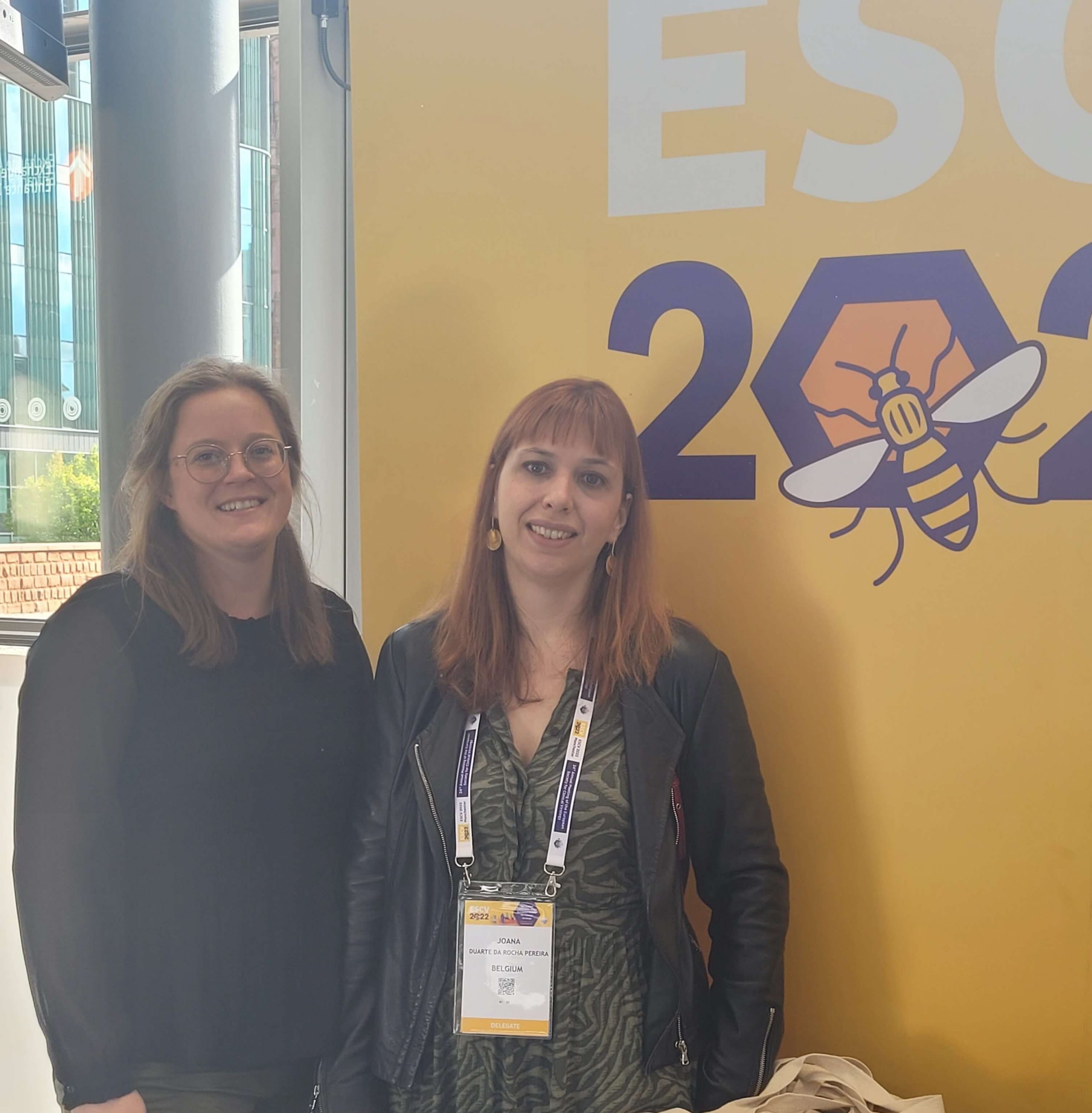 Between the 7th to 10th of September 2022, Joana Rocha-Pereira, Jana van Dycke, and Johan Neyts were in Manchester, the United Kingdom for the ESCV 2022 event. The ESCV 2022 event is the 24th Annual Conference hosted by the European Society for Clinical Virology. This meeting was the first in-person meeting of the ESCV since the pandemic began last year.

Meet Joana, Jana, and Johan, our partners from KU Leuven

Joana Rocha-Pereira is an Assistant Professor at the Rega Institute, KU Leuven, Belgium. After obtaining her PhD at the University of Porto in 2013, she has established a collection of in vitro assays and small animal models to study viral replication for human noroviruses, rotaviruses, bunyaviruses, and more recently, for COVID-19. Currently, Joana is using zebrafish as a new model to study virus replication and intestinal organoids.

At Rega Institute, Joana supervises Jana van Dycke, a Postdoctoral researcher who is working in the Laboratory of Virology and Chemotherapy. In collaboration with Amsterdam University Medical Centers (AUMC), Jana is developing and optimizing the gut epithelial-immune cell co-culture model and to prove that this model can be used as an infection model. Upon establishment the model will be used to assess toxicity and anti-norovirus activity of small molecule inhibitors.

Johan Neyts is a Full Professor at the Rega Institute. His team focuses on the development of novel antiviral strategies against a number of RNA viruses including flaviviruses (such as dengue and Zika), picornaviruses (rhino- and enteroviruses), coronaviruses, norovirus and others. His lab is a partner in several large EU funded consortia on the replication machinery of RNA viruses as targets to inhibit viral propagation and on the discovery and development of antivirals and vaccines.

On Wednesday, 7th of September 2022, Joana had a talk (titled ‘Rift valley fever virus infects the sensory nervous system of zebrafish larvae in a JAK/STAT-dependent manner’) during the first session of the event: Neurological Infections. During her talk, Joana spoke about studying the pathogenesis of rift valley fever virus infections by means of an infection model using zebrafish larvae. She also explained that during her research, she discovered that the virus targets sensory neurons and directly infects the eye rather than the brain of larvae. According to Joana, her research shows that the host immune response drives the virus to invade the eye, rather than just infecting the liver and vasculature.

A few days later, on the 10th of September 2022, Johan Neyts delivered a keynote lecture titled ‘New tools for clinical virologist in the future?’. During this lecture, he highlighted the process from automated screening to drug optimisation utilising medical organic chemistry, focusing on virus level. After his presentation, he was presented with the Gardner Lectureship Award, an award that is given to eminent virologists with a central interest and practical experience in the field of diagnostic or clinical virology. “I am very honored to have received the Gardner Lectureship Award, congratulations to the organizing committee for a very interesting conference” he shared later on via his Twitter account, while also mentioning other winners of the award.

“I enjoyed the broad range of topics and clinical focus. Besides the lectures, there are booths from the main diagnostics companies so people can get updated on new tests, equipment for the clinical labs, some also useful for research labs.” Joana shared. She also noted that she was very intrigued by the talks from Professor Emma Thomson (MRC Centre for Virus Research Glasgow) on the emergence of seve non A-E hepatitis in young children. “It gave us a detailed overview on the work done both by her team and that of Professor Judy Breuer on identifying the viral cause of such outbreak. This was often in the news earlier this year” she said.

Jana on the other hand, highlighted the opportunity to connect with other virologists at the event. “The ESCV 2022 gave us the opportunity to connect with other virologists that are closely linked with the clinical setting and diagnostic approaches of viruses” Jana said. She also shared about the keynote lectures that were given at the event, and which keynote lecture stood out to her the most. One keynote presentation that stood out to Jana was titled ‘Genomics and Microevolution of Emerging Viral Threats: insights from SARS-CoV-2 and Monkeypox’ by Vitor Borges. “It was my favorite because it showed that what scientists learn and establish on one virus can be translated to other viruses and in a fast way. Which in the case of new viruses emerging is very important” she shared.

Would You Like to be Updated on their Research?

Follow us on our LinkedIn, to stay updated with Joana’s research on Zebrafish as an infection model, Jana’s transmission and gut-immune model system in transwells, and Johan’s take on the future of clinical virologists.